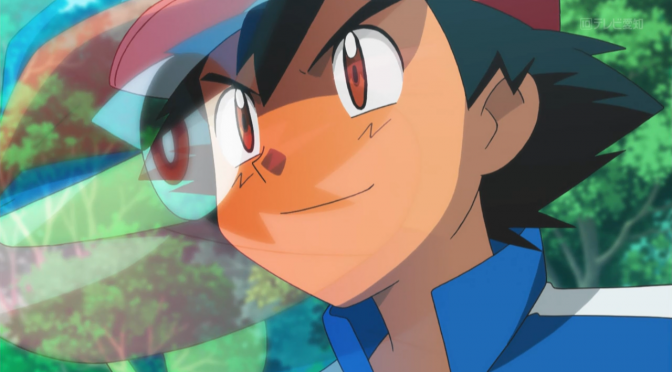 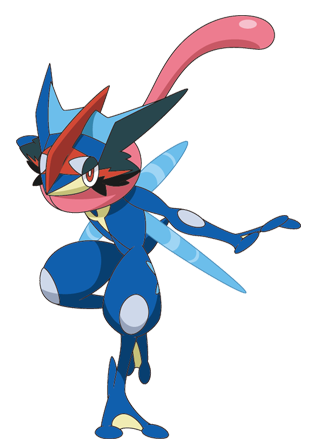 The “Ash Form” is a form that only Ash’s Greninja can take. It is a synchronization between Ash and Greninja called “Bond Phenomenom” and appears to have ancient origins. 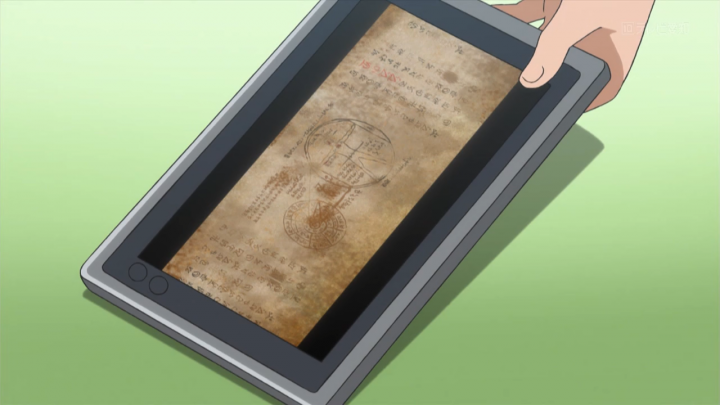 The Bond Phenomenon occurs very rarely, when the mutual trust between Pokémon and his trainer reaches very high levels, and the two manage to dominate it.

The Pokémon can use the “Bond Phenomenom” possess a special ability, thanks to which they manage to understand which trainer is able to bring out this hidden power. That’s why Greninja chose only and exclusively Ash as it’s trainer, rejecting anyone else.

The phenomenon occurs when the brain impulses of Ash and Greninja synchronize up to join. At that point the two are related to each other as if they were in one body.

During the syncronization, Greninja transforms and it becomes similar in appearance to Ash.

Their movements are identical and, as revealed by one of Clemont’s gadgets, they share the same heartbeat. Ash can also see through Greninja’s eyes, in fact he describes what he feels during the syncronization as if he “becomes” Greninja.

However, this phenomenon has side effects for Ash, which in fact states that he feels very tired after every syncronization.

Every time that Greninja is hit, Ash can feel the pain in the same spots in which his pokémon is hurt.

The energy released by the syncronization can also be too violent for Ash, to the point that his body becomes paralized and he faints because of the pain and fatigue.

To be able to withstand the power of synchronization, Ash conviced himself that he has to become as similar as possible to Greninja.

Due to this he undergoes himself to its same workouts, although with difficulty since, obviously, an human cannot compete phisically with a Pokémon. 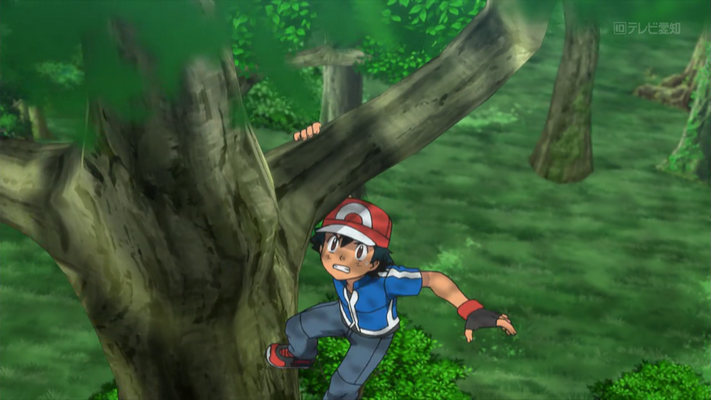 After the first training, Ash accepted a battle against Champion Diantha. In this occasion, new traits of the synchronization came out. This time Ash resitsted longer, reaching a “new level”.

The brain waves analysis performed by Lem recorded some changes: their intensity became higher and higher. At the same time Ash seemed increasingly “involved” in the fight and started to repeat phrases like “much, much stronger!!! ” or “much, much faster!” very frequently until Greninja jumped out from the water veil that had always surrounded him. Since then, the veil became a big water-shuriken. 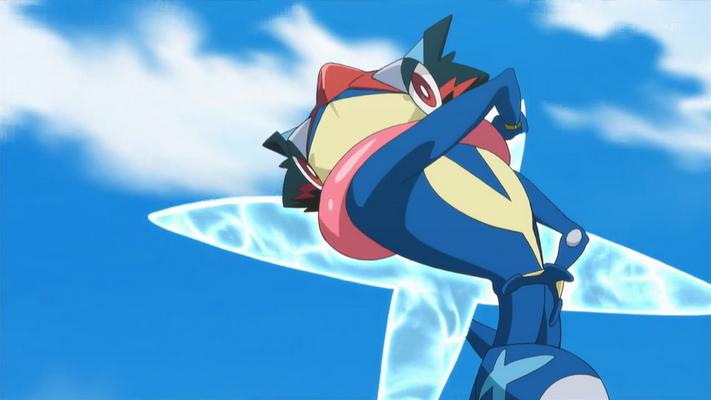 The power reached by Ash and Greninja was so high that floored Diantha’s Gardevoir. 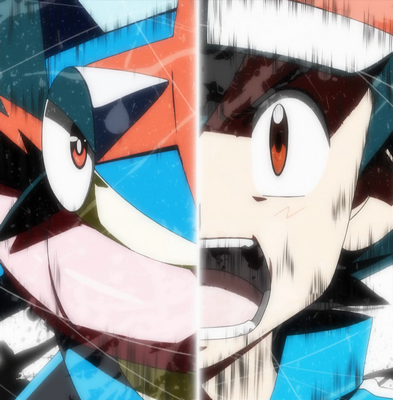 At that point, though, Ash seemed almost “crazy” and while Lem’s indicator was still recording abnormal brain waves, he ordered Greninja to go on with what turned out to be a ruthless knockout blow for Gardevoir. If Ash hadn’t suddenly collapsed again, he would have defeated champion Diantha’s Pokémon in all probability.

During the battle against Sawyer (episode XYZ 26) for the first time the synchronization failed. Ash was flooredb by that and initially no one was able to understand why that happened. The only thing that Clemont was able to state is that, during the battle, Ash’s and Greninja’s pulses were completely desynchronized. Following the events of the episode XYZ 28 it is knew that the synchronization is probably not happen because Ash was unconsciously worried due to Sawyer, who has won his last medal before him and has become unexpectedly strong in a short time. 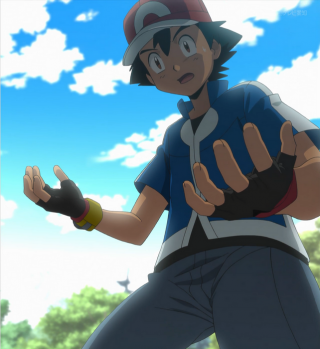 During the first fight against Wulfric (episode XYZ 27) Ash managed to synchronize with Greninja. However, he could feel all the hits received by Greninja and this annoyed him. 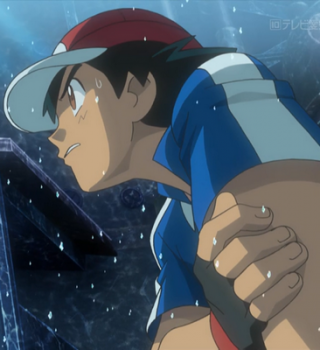 Fearing another defeat because of a collapse, Ash lost his concentration and ended up suffering from many attack. When Greninja was thrown violently against a wall, Ash was no longer able to bear the pain and collapsed again, causing the defeat of his Pokémon (since they were synchronized). 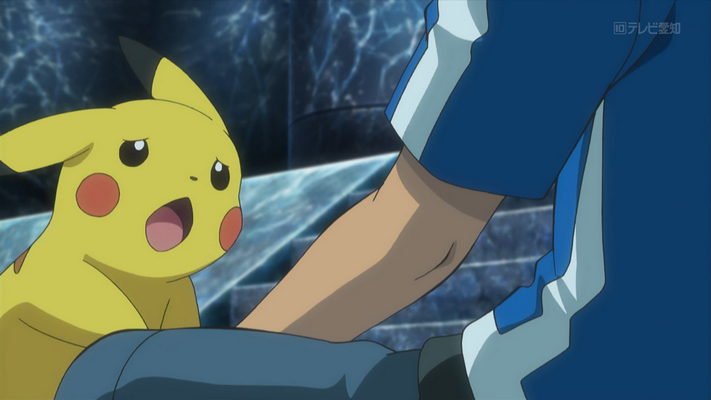 Ash feared he had disappointed Greninja, and that night he apologized to him for not being able to bear the hit. If Ash had endured more, Greninja could have unleashed its full power. Therefore, Ash must learn to resist more... But how? 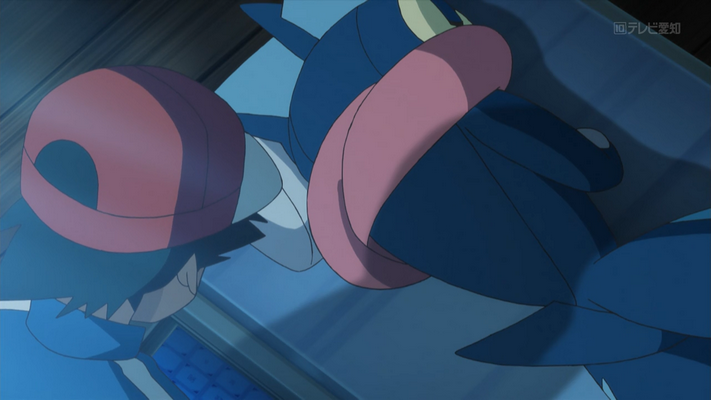 As usual when he feels sad and discouraged, Ash asks his friends to be left alone. So he walked the Winding Woods in search of an answer. 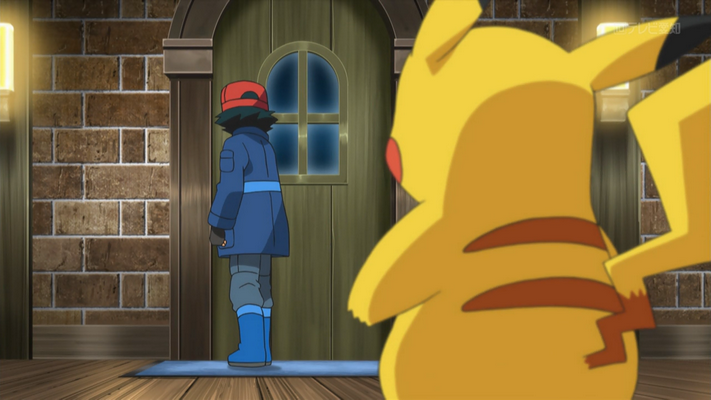 (episode XY120) After being scolded by Serena, Ash recovered his optimism, remembering that whatever the difficulties are, he must never give up. This helped him when, a few hours later, he and Greninja saved a Pokémon in danger during a snowstorm. The will to save that Pokémon was so strong that allowed Ash and Greninja to achieve perfect synchronization. 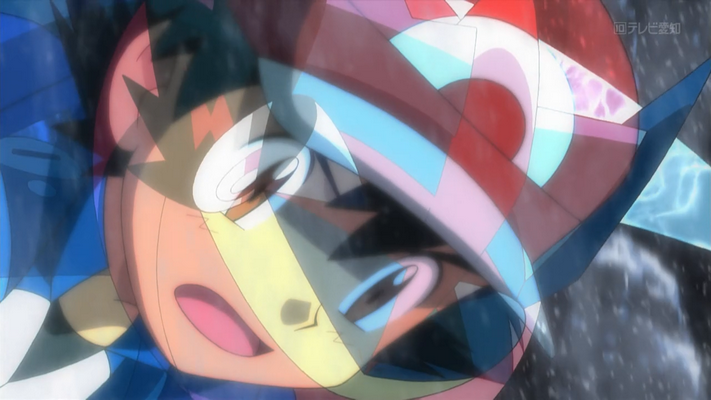 At that point, Ash apologized again to Greninja: he gave priority to gaining the badge and keeping up with Sawyer, to whom he had promised to immediately win it. During the battle, Ash’s only thought was: “I’m a trainer so I have to do my best and hang on”, but in the forest he understood that this does not necessarily mean succeeding in it alone. He has a precious friend at his side, ready to give him his strength. 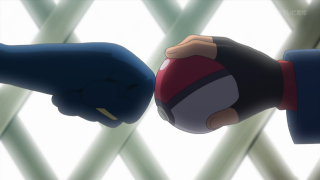 Before knowing Ash, Greninja was one of the frokies available at Professor Sycamore’s laboratory for the new trainers.

However, compared to the other Pokémon of the same species, Ash’s Froakie was very different. As explained by Gym Leader Olympia, it is a Pokémon with a peculiar destiny. In fact it never played with the other ones in its herd, and it spent all its time training so it could become stronger and stronger. However, this was the cause of a fight with the others, and it ended up hurt and being medicated by Nurse Joy. Thanks to her kindness, she managed to teach it that it couldn’t become stronger all on its own: it needed a trainer. 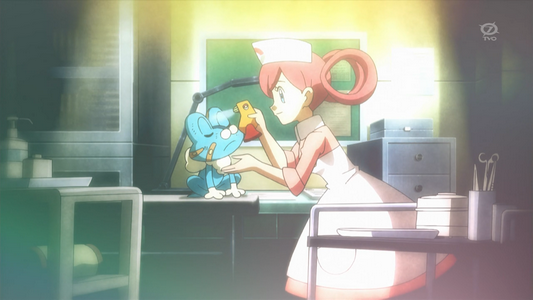 Froakie, however, didn’t just want any trainer. It was determined to understand which trainer was worth dedicating its life. It expected great things from its trainer, but every time someone chose it, Froakie ended up disappointed and decided to go back to Professor Sycamore’s laboratory. This went on until it meet Ash.

Froakie was very impressed by Ash’s determination, by his courage and by his love for the Pokémon. And so it chose him as its trainer. It is thanks to this special connection between Ash and Greninja that the syncronization can occur.