The most reliable and detailed guide about Ash Ketchum 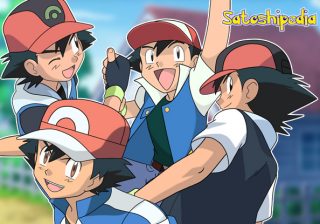 Ash Ketchum is the main character of the Pokémon Anime. He is based on Red, the protagonist of the first generation games (Pokémon).  The original name Satoshi means “Wisdom” (a quality that Ash has gradually gained throughout the series) and comes directly from the Pokémon creator, Satoshi Tajiri, which, in many interviews, claimed to be reflected in the character. In the games Pokémon Red and Blue, and Pokémon Yellow, Ash is one of the default name which the player can choose. His surname “Ketchum” comes from the slogan “gotta catch ‘em all”, but it is also a real and existing surname. It’s possible that it has been choosen due to the number of movements of the mouth made, in the anime, to pronunce the protagonist ‘s original name, in order to make the dubbing easier since “Satoshi” has two more syllables than “Ash”.

As many others shōnen characters, he would like to achieve a very difficult goal. In this case, Ash wants to become a Pokémon Master. For this reason, he travels around the world challenging Gym Leaders and competing in Pokémon Leagues, similarly to the protagonist of the videogames.

Though being a character with the typical shōnen hero peculiar features, Ash has some specific qualities which highlight an even more articulated personality. In particular it stands out his exceptional ability to comfort and encourage those who need a helping hand, making use of his empathy. This makes him a landmark for most of his fans, so that in the book “The Japanification of Children’s Popular Culture” Ash is cited as an example of cultural identification. Additionally it emphasized the character’s growth and development as the anime series progressed.

Ash is particularly unselfish, empathetic and kind, but at the same time he also has other peculiar characteristics, like his courage and determination. Ash is indeed extremely stubborn and he never gives up, despite difficulties. His motto is “saigo made akirameru na” (literally: “never give up until it’s over“). As mentioned above, he shows a particular empathy, thanks to which he always manages to find the right words to cheer up those who need it. Thanks to this particular trait, friends consider him a sort of psychologist in the group, often making use of his own teachings on how to face life and its difficulties.

But when he is having a problem, he prefers to keep everything inside and can become grumpy against anyone who tries to help him. Ash established  a relationship based on trust and mutual respect with his Pokémon: he wants his team to feel part of a big family. Moreover, as explained by Takeshi Shudo, Ash also has super-strong feelings thanks to which nothing can traumatize him, so that he has never been deeply shocked by the absence of his father. In fact this has strengthened his character.

Ash appears as a boy of short stature (165 centimeters) and thin, but at the same time very athletic and vigorous (as a matter of fact, he is known for his great agility).
He is used to wear a red hat on his thick and messy hair, while, as far as his hands are concerned, he wears some fingerless gloves. He prefers to wear jackets with short sleeves and long pants (probably for convenience and practicality while travelling).

On the 1st of April, after his 10th birthday, Ash left his hometown Pallet Town, along with three other trainers, including Gary Oak, his rival since childhood.
But that morning he overslept and met Gary, professor Oak’s grandson, from whom he already received his first Pokémon. Once he reached the professor laboratory, Ash found out that all the starters (Bulbasaur, Charmander and Squirtle) had already been taken, so he decided to take an exemplary of Pikachu, the only remaining creature, together with the Pokédex provided by the professor (called Dexter). However, Pikachu hates Poké Balls, which is the reason why it still follows Ash as if it was a “free” Pokémon. Initially, it caused some problems to its trainer by not respecting him, but when Ash risked his life to protect the little Pokémon injured by some Spearow, the two became inseparable friends. At the end of this adventure, Ash and his Pikachu saw a peculiar Pokémon. During a video-call with professor Oak, Ash realized that it was the legendary Pokémon Ho-Oh, but nobody believed him. He was, in fact, the first to have seen Ho-Oh in the last three centuries.

Since Pikachu is able to generate powerful electrical attacks, it is often the target of Jessie, James and Meowth (members of Team Rocket) plans, that often consist on trying to steal the Pokémon and bringing him to their boss Giovanni. At the beginning, Ash was accompanied by Misty, who followed him to get her bike back, taken by Ash to save Pikachu and destroyed by the Thundershock it used to help Ash. Having to win eight badges in different Gyms to partecipate in the Pokémon League, he fought Brock, the Gym Leader of Pewter City, who joined the team after being defeated. In the second season of the anime (according to the western numeration), Ash finally participated in the Kanto League, situated in the Indigo Plateau, where he was defeated by his friend Richie and finishing in the top sixteen positions.

Subsequently, Ash traveled through the Orange Islands alongside Misty and Tracey Sketchit to win the Orange League. In the episode “Enter The Dragonite” he defeated Drake and obtained the trophy. Ash’s next journey took place in the Johto region, where, once again, he was followed by Misty and Brock. In the Johto League, Ash finally defeats his rival Gary, but is then beaten by Harrison finishing in the first eight positions.

In the Advanced Generation series, Ash had to separate from Misty and Brock, which made him feel very sad. However, Brock came back and joined again Ash and his new friends: May and Max. This time, a more mature and experienced Ash acted as if he was a mentor for the young new trainer, May. In this region Ash had to defeat again 8 Gym Leaders in order to enter the Hoenn League, where he also fought his friend and rival Morrison. Ash finished alongside the eight best trainers.

Next, he separated from his friends again and came back home. However, he found them right there, in Pallet town, a place in which they decided to set off again for another journey altogether. This time, Ash’s main objective was the Battle Frontier. Ash defeated all the Frontier Brains, gaining the Champion title in the episode “Pace – The Final Frontier!“, during which he managed to win against Baldo. At the end of his second journey through the Kanto region, Ash saw for the first time Gary’s Electivire, experience that lead him to decide to visit the Sinnoh region, where he met again his friend Brock. 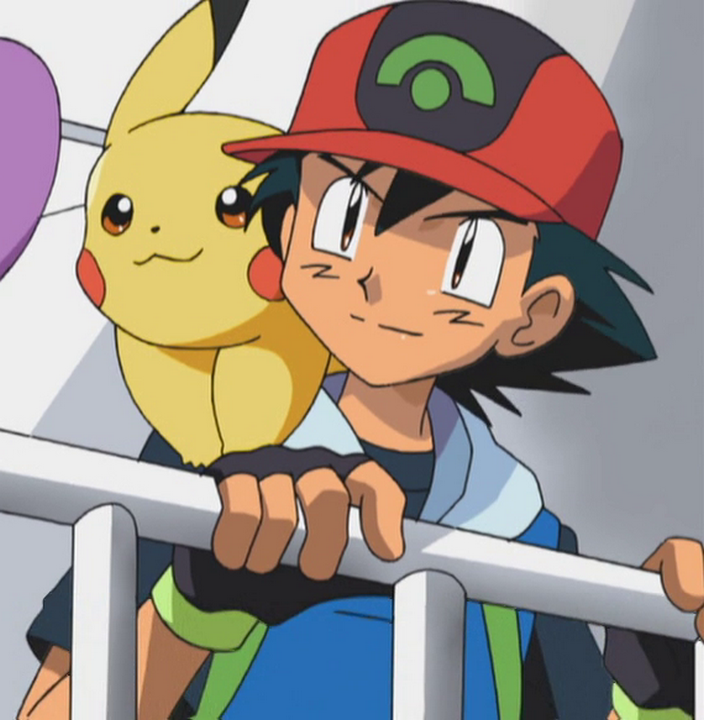 In Twinleaf Town, the two met Dawn and with her they started a new journey during which Ash not only faced matches in Gyms, but also, with her new friend, joined two Pokémon Contests. During this series Ash, has become an experienced trainer, specialized in creating new and spectacular fighting strategies, so much that Dawn developed a great admiration for him. However, more than once Ash has been under pressure because of his new rival, Paul, who is used to train his pokémon with completely different methods from the ones used by Ash. Paul, in order to make his pokémon stronger, doesn’t even worry about them. His methods, for this very reason, are stricts and heedless. After many difficulties, Ash finally managed to defeat Paul in the most spectacular match of his life, arriving at the semifinals of the Sinnoh league but being defeated by Tobias and his legendary Pokémon.

However, Ash was the only trainer who managed to defeat not only Tobias’s Darkrai, but even his Latios, this way becoming the moral winner of the Sinnoh league. Once the competion ended, Ash separated from Dawn and Brock. In the end the latter wouldn’t come back to travel with Ash because he decided to study very hard to become a doctor.

The events of Unova region are NOT mentioned nor in the Diamond&Pearl Series, nor in the XY One. Satoshipedia is based solely on what is demonstrated in the series that constituite the original timeline of the Pokémon anime. So the lenght of the Black&White series constitues a hole in the timeline.

The time hole starts from Ash’s return at home in the last episode of Diamond&Pearl (autumn) to Ash’s arrival in Kalos (late spring of the following year). So, we continue counting the timeline by adding an year.

The XY series, in fact, sees a return of Ash as we had left him in the Sinnoh region: mature and extraordinarily skilled in Pokémon battles. In a short period of time, Ash has improved a lot his trainer skills and during the XYZ series he  also discovers a power that binds him to his Greninja. Thanks to it, Ash reaches a level never seen before and is ranked finalist in the League of Kalos. His travel friends were Clemont, Bonnie and Serena. The latter is in love with Ash after he, as a child, helped her in a forest where she had lost. Upon arrival in Kalos, Serena recognizes Ash seeing him on television and decided to travel with him.

someone might ask «And what if XY is a series not connected but alternative as well?»
We don’t have proof that XY is the sequel of Diamond&Pearl, so we’ll still call “original series” the episodes untill the end of Diamond&Pearl. But as already said, in XY Ash shows a psychological progression which is cohoerent to the original series. This, united to the fact that Ash’s age was never mentiones, permits us to include XY and XYZ in the encyclopedia.

The reason for which Ash’s parents are separated is that his father, a person whom information are ignored, abandoned the family a little while later Ash’s birth, leaving a young 19-year old Delia alone. We only know that he is a pokémon trainer (who doesn’t appear in the membership list of the World Pokémon trainers Association) currently travelling in a far land. As for Ash’s maternal grandparents, Delia’s mother died because of a disease, while her father had a behavior very similar to that of her husband: he also left home to become a trainer.

Moves marked in dark blue are the ones currently  known or used recently by the Pokémon. 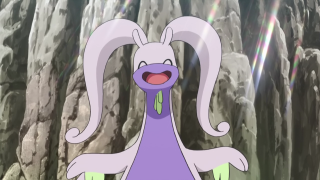 Evolution of his Sliggoo, which evolved from Goomy, caught in the episode “A Slippery Encounter!“. Ash helped it to become stronger, so that it could protect its friends. It returned to live with them in the episode “Beyond the Rainbow!“.Moves: Rain Dance, Bide, Dragon Breath, Dragon Pulse, Ice Beam. 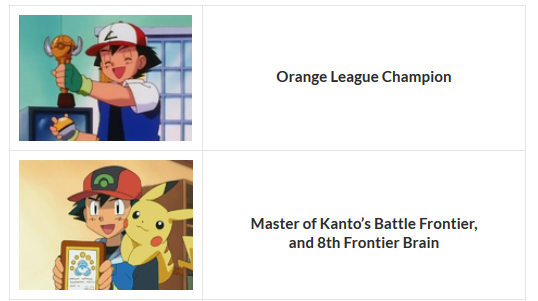